Have you ever wonder you are underpay at work?
Or you are not sure how much should be your well-deserved deal to a job offer?
In this post, we will walk through Stack Overflow survey from developer over the world in 2020 to clear out these questions.

I studied Electronics, then worked for a Manufacturing in silicon industry as an Equipment engineer. My job mainly focusing on fixing, improving the machine and its process performance for better yield, quality and less downtime. This required lot of problem-solving skills. I spent time on writing script to automate data collection, processing & visualization to make decision diligently and quickly. I got addicted on working with data and decided to switch my career into Data Science sector.

I got a lucky chance to work as a Data Engineer professional since 2018 and massively learning a lot while not paying attention so much to the salary. I take this opportunity to deeper understanding how the market looks like on the three below main points:

You can find the jupyter and dataset from below repository for further references in code.

What are the top priorities of working as a developer professional?

Apart from compensation & location, in this question, we would like to know which factors would affect most to developer to choose an offer over others. Interested data are taken from JobFactors column.

Overall, developer prefers to continue working on their technology stack (languages & framework) from more than half of respondents (51.3%). Similar percentage of responses 41.4%-43.9%-44.5%, the three following important factors are company culture, flexible schedule and professional development opportunities. The least important factors are the financial performance of the organization (11.9%), the specific team they would be working on (11.8%), and the diversity of the organization (6.9%). 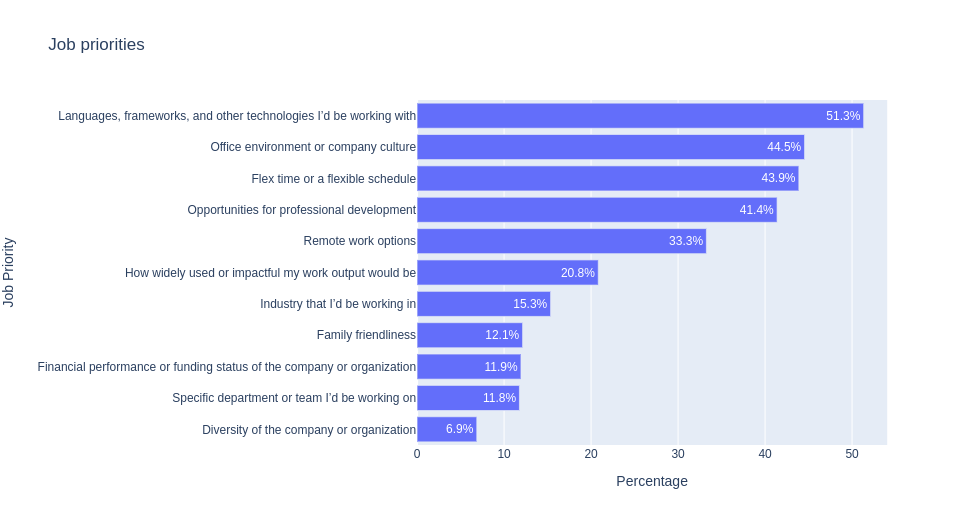 What are the top paying coding languages?

In this question, we try to know which coding language got pay most. We only filter who is working with these languages as a developer professional. The salary is treated as how much he/she can make per year in USD unit. Median method is used to avoid the deviation of salary range between countries.

People working with Perl are getting the highest pay at $77.7K which is interesting (Perl is one of the most dreaded languages as well). Scala is the second highest pay with $76.5K, this language is built for object-oriented & functional programming and widely used in big data processing. Next is Rust with yearly salary of $73.7K which is also the most favorite language in 2020. Go continues to be in the top 5 ($72.2K) with the raise of DevOps in recent years. 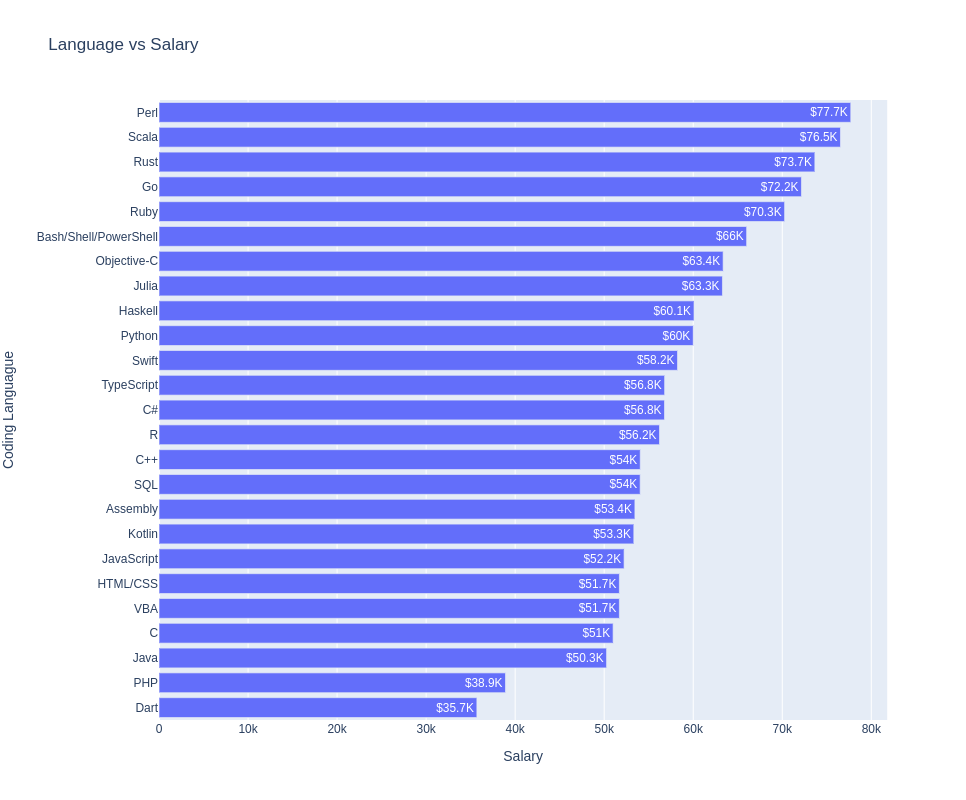 Understand the correlation between salary with developer type, year of experience?

In this question, we try to understand more the correlation between salary with developer type and working experienced years. Firstly, we quickly see how the salary mapped with Developer Type as horizontal bar charts as previous 2 questions. Then, we try to draw the correlation of the 4 data: salary, dev type, average experience year and number of respondent respectively.

Apart from Engineering Manager & Senior Executive/VP (more than $80K); the site reliability engineer is getting the highest pay which is understandable because of the importance of this role. DeveOps specialist & Data engineer receive high pay in top 5 with $68.1K & $64.9K respectively. This is interesting because Data scientist got lower pay at $58.4K. 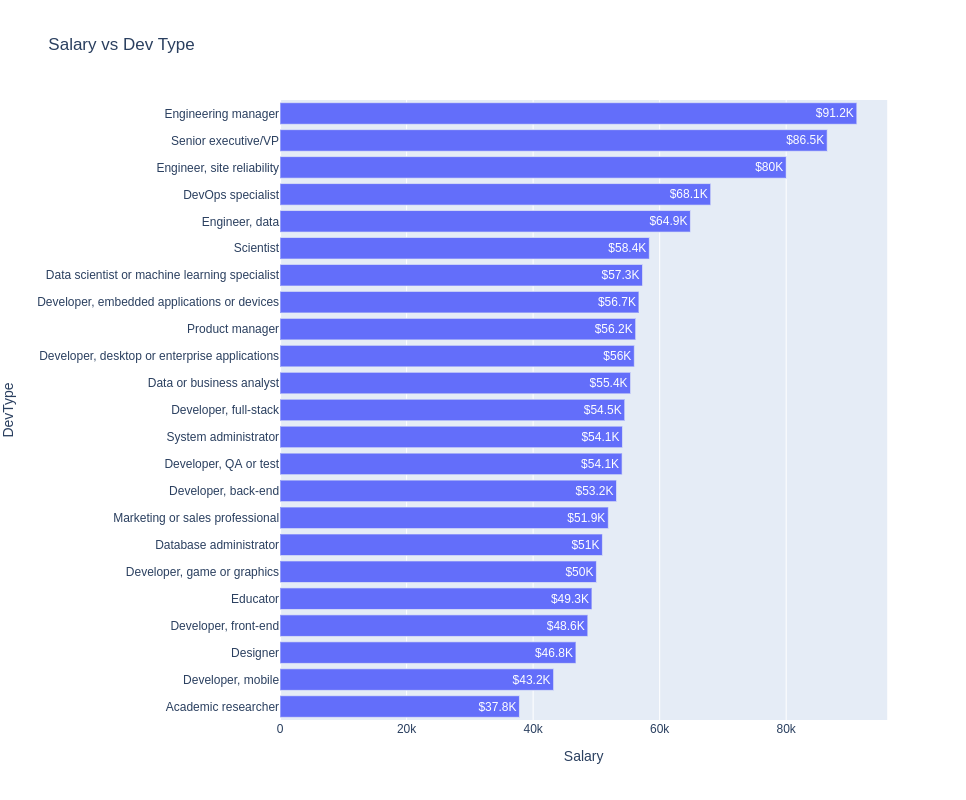 Overall, as denoted by linear regression line, people tend to have higher salary with more years of experience. Engineering manager and senior executive got highest salary and mostly worked longer compared to the rest (more than 13 years).

There are some differences at specific developer roles when we observed that SREs, DevOps and Data Engineer command a significant high salary compared to other developer roles at the same yearn of experience. 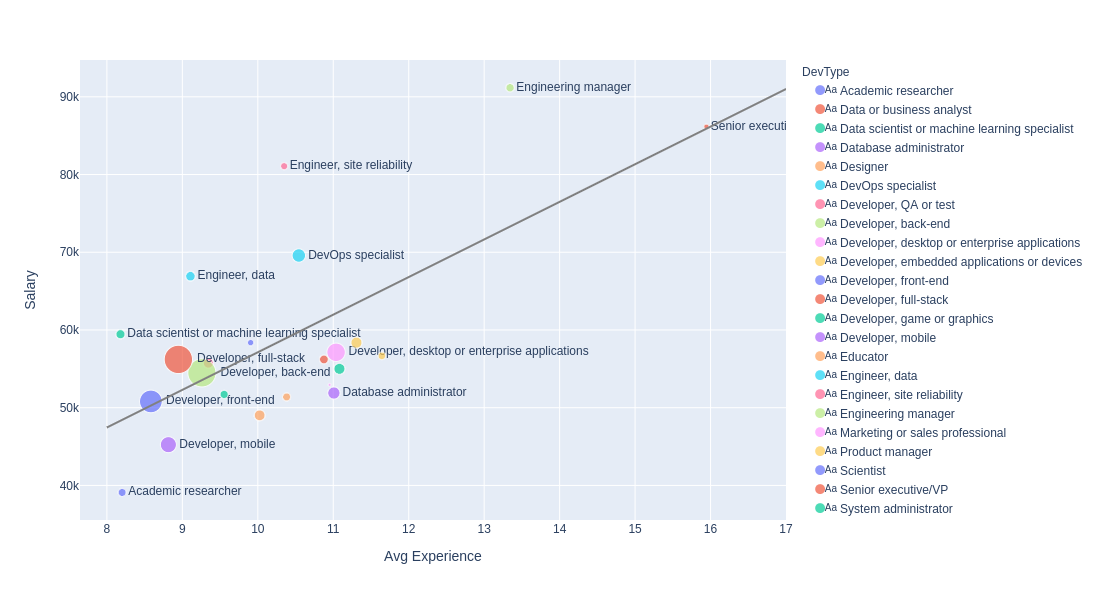 In this article we took a look on how is the correlation between salary with developer type, year of experience and coding languages as well as the most impactful factors to decision on one offer other others. The result somehow demonstrate the market trend/behaviors in 2020 conducted by Stackoverflow survey.